Penguin 2.0: The Real Dirt Google Doesn't Want You To Know

Twitter and the SEO forums have been abuzz the last few days with the impending apocalypse known as Penguin 2.0. Matt Cutts has been almost giddy with how brutal this one is going to be, I found myself wondering if he was wearing adult diapers to handle any embarrassing accidents caused by anticipation of the coming onslaught.

Never ones to take it lying down, we reached out to every one we knew with connections at Google past and present to see if we could dig some dirt on the situation and get a head start on the next series of SERP ass poundings Google has lined up for us. In times like these, a few days head start can be the difference between eating Ramen noodles (uncooked) or Craft Steakhouse (Kobe Short Skirt and the Porterhouse are personal faves) so we left no (grind)stone unturned in our efforts to unearth what's coming for us. For days, we found nothing. Battered, with dashed hopes and a feeling of impending doom weighing us down, we considered quitting and just waiting for it to hit us broadsite, no matter how shitty that situation may turn out to be.

And then, like manna from heaven, our efforts to reach Mr. XYX (those are his chromosones, don't ask, it's a touchy subject), a former Google employee who left in a huff when they closed down his favorite cafeteria in Mountain View after the Google China debacle forced them to cut costs closer to home, paid off. And how.

The following conversation has been changed to protect the insolent:

Grind: Sorry mate, could you speak up a bit, didnt' catch that.
Mr XYX: I said, do you have any short ribs...I really like short ribs. Did I mention they used to serve shortribs on the Mountain View Campus?

Grind: You did mention that, three times actually and unfortunately, you're in Oakland and I'm in Idaho, so no, I don't have any short ribs. And if I did, I couldn't get them to you.
Mr XYX: What about some delivery? I'd feel a lot more comfortable telling you this with some shortribs.

Grind: Fine, what's your address? And where do you want me order them from?
Mr XYX: I'm not comfortable telling you that information.

Grind: For fucks sake man, how am I supposed to get you these shortribs so we can get on with this?
Mr XYX: Bitcoins?

Grind: Sent. Order up dem ribs and let's get back to business, people are waiting on this.
Mr XYX: OK, but you can't tell anyone where you got this info from.

Grind: Really? Is it going to be Zebra 1.0 then?
Mr XYX: Nope. It's a complete shift away from black and white themed animals. The first in a whole new horizon of algo updates.

Grind: Hippo. That's interesting. And to be honest, a bit refreshing.
Mr XYX: You think that now, just wait.

Grind: Wait for what?
Mr XYX: Hippo really is the shit. Matt isn't psyching everyone out on this one. Hippo is a game changer.

Grind: Does it take out hacked links? Russian and chinese blog networks? Devalues anchor text even more? Details my good man, details...
Mr XYX: I have a video.

Grind: You do not.
Mr XYX: I do. It shows exactly how Hippo will change the SERPS for good.

Grind: Can you share it? Myself and thousands of enterprising SEOs would love to see it before it hits us in the face.
Mr XYX: Yeah, you can say that again. Don't say I didn't warn you, it's going to be a shitty experience for all SEOs, not just you black hats.

Grind: Speechless. No wonder Matt is so excited. Total game changer. I'm going to apply at McDonalds now and beat the rush.
Mr XYX: Can you order me another batch of ribs and some kung pow chicken before you leave?

So my buddy Mitch is a fucking badass and told me he was going to try to find Rand a dog snuggie as a gift during SEO rockstar greet and grope he was attending. Unfortunately, the dog snuggie google SERPs didn't bring back any quality results and 40 minutes of calling around to local big box stores (on his bosses dime, probably) didn't deliver the goods. So he improvised... 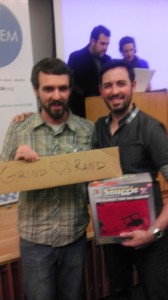 Needless to say, Rand was a really good sport about it and even posed for a second photo with him, although I'm not sure if he was confused to exactly what type of photo he was posing for or if he is just super excitable.

Either way, kudos to Rand for playing along and big ups to Mitch for having cajones the size of cantelopes, most internet dwelling neckbearded (I'm kidding, it's a fucking epic beard, don't beat up anybody on a bus) denizens won't control their assburgers long enough to even order pizza, let alone go shake the flesh and troll real life SEO super heros. To the both of you, if ever we shall meet IRL, the drinks are on me. Unless you order something that comes with an umbrella and a cherry... 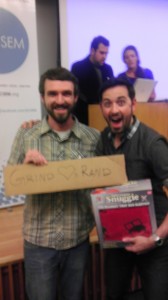 Mitch, where is your other hand?

Now I just need to go train for a marathon (who the fuck am I kidding, maybe some sled sprints/burpee/pullup HIT but no long slogs here) with Mr. Cutts and all will be right in the universe.